Vitalik Buterin opens his heart: “I want Ethereum to become more like Bitcoin”

Opening his heart to the public, Vitalik Buterin exposed some contradictions that still live in his head. The biggest one is his desire to see Ethereum become more like Bitcoin. However, the founder of Ethereum highlighted that this requires a lot of collective effort in the short term. Going further, the genius behind the creation of Ethereum also exposed thoughts on how he visualizes layer 1 of his cryptocurrency. As well as he talked about other political and social issues surrounding cryptocurrencies. Ethereum is currently the second largest cryptocurrency on the market, after Bitcoin. Therefore, due to the anonymity and disappearance of Satoshi Nakamoto, Vitalik Buterin can be considered the most important figure in the sector in activity.

Through his social networks, Vitalik Buterin cited ten contradictions that he still thinks about. The first is related to the many differences between his currency, Ethereum, and the biggest one, Bitcoin.

“Contradiction between my desire to see Ethereum become a more Bitcoin-like system, emphasizing long-term stability and stability, including culturally, and my perception that getting there requires a lot of active and coordinated short-term change.”

In addition to Bitcoin not having a central figure in its development, several other points make it different from Ethereum. To name a few, many people disdain Ethereum for not having a maximum supply, as well as the minting of new coins not being controlled by math. As for cultural issues, Bitcoin today has many more advocates and “lawyers”, including big names. Furthermore, Ethereum’s success depends more on third parties than on itself, which brings us to the next point.

Vitalik Buterin has stated several times that he did not foresee the growth of non-fungible tokens (NFTs). In addition, he has already expressed concern about people spending millions of dollars on images of monkeys. However, today the creator of Ethereum is still trying to convince himself that this is good for the industry, as shown below.

“Contradiction between my dislike of many modern blockchain financial “applications” ($3 million monkeys, etc.), and my grudging appreciation for the fact that these things are a big part of what keeps the crypto-economy running and paid for by everyone my favorite governance/DAO experiments.” 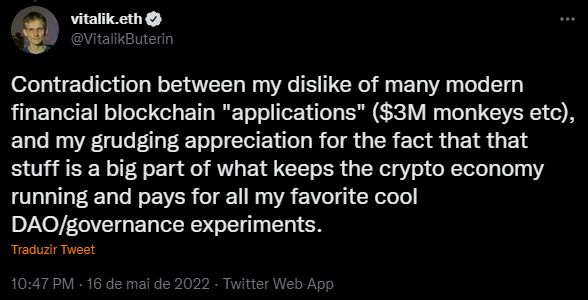 Finally, the last highlight is the changes to its own currency, Ethereum. For Vitalik Buterin, his layer 1 should be simple, leaving the complexity to the next layers. Something similar to Bitcoin (layer 1) and the Lightning Network (layer 2).

Still on this topic, Buterin pointed out that many large projects depend on security that Ethereum does not have. This is worrying, after all, in addition to BRL 1.18 trillion of ETH itself, there is much more money at stake in its ecosystem.

“Contradiction between my desire to see Ethereum become a Tier 1 that can survive truly extreme circumstances and my realization that many important applications on Ethereum already rely on security assumptions far more flimsy than anything we deem acceptable in the design of Ethereum. Ethereum protocol.” 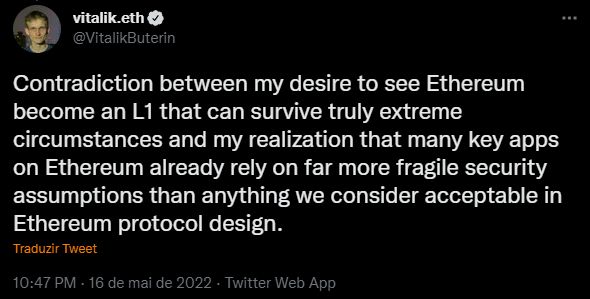 Other points addressed by Vitalik Buterin were political and social experiments such as cryptocurrency countries, as well as their role in conflict resolution. His full list of contradictions can be seen at your page on twitter.