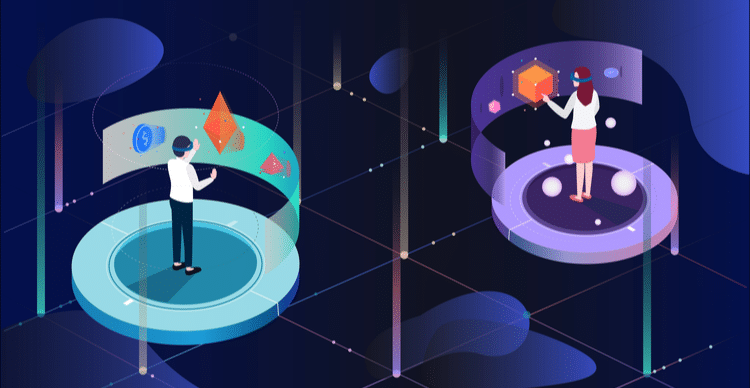 The Metaverse has immediately gained worldwide attention in the last few weeks, which is due to the name change from Facebook to Meta. The company wants to use its social network and combine its own Virtual Reality (VR) technology from Occulus Rift as a future strategy.

However, none of this is new within cryptocurrency – this has been happening for a while with projects like Decentraland, Axie, Enjin, Sand, and many more.

What is the metaverse?

"Shared web-based environments that sometimes mimic reality and people can express and explore, and often build, the world around them." – Charles Read, founder of Rarestone Capital, a groundbreaking crypto VC.

What are metaverse coins?

These are crypto-related coins that are either planned for the future or currently have metaverse. These coins are typically used as a medium of exchange in metaverse economies and provide governance and economic incentives from the project in which they are involved.

Most of the 10 projects below are quite large and have high levels of liquidity, which means they are easy to buy and sell on reputable exchanges. This is good for you as a user because you can buy these crypto coins more efficiently and usually at a lower cost.

Decentaland was founded in 2017 and is one of the established Metaverse-based projects in Crypto.

Decentraland is owned by users who create it. It was created with the virtual world of Ethereum where you can play, explore and interact with games and activities. You can also buy land or create your own environments, marketplaces and applications.

If you're familiar with games like Roblox & Minecraft in the non-crypto world, that's not that different from these. The main difference between Decentraland and these games is that Decentraland is managed by its users through a DAO and is built on a chain.

Three associated tokens are $ MANA, $ LAND, and $ ESTATE. All of them work in combination for different areas of the decentralized economy.

The platform is managed by its users through the Decentraland DAO, a decentralized autonomous organization.

The platform provides methods for creating digital assets known as ERC-1155 tokens. You can use these in several games. The ERC-1155 tokens are superior versions of the ERC20 and ERC721 tokens.

Cross-game items, a selection of digital assets that can be used across the “Multiverse”, allow ownership across a large number of platforms that are not limited to one platform. With these items you can also trade them with other users on marketplaces or p2p via Enjin Wallet.

Enjin has released software development kits (SDKs) that allow users to create digital assets on Ethereum and integrate them into games and apps.

Axie is a crypto game similar to a Pokémon-style game in which players raise, battle, and trade cute NFT pets called Axies – founded by Sky Mavis who launched the game in 2018. As of August 2022, the game had around 1 million daily players.

According to data from AxieWorld, the game generated $ 364 million in log revenue in August, up from $ 196 million in July. This revenue was the second largest revenue-generating project behind Ethereum, which took the top spot.

Axie Infinity is based on the Ronin sidechain, an Ethereum sidechain, to make the game more affordable.

It has two native cryptocurrencies:

The big selling point is the play-to-earnings model, which allows users to actually cash in on income in-game and then exchange it for non-in-game assets to generate income from.

Sandbox is a project in the Ethereum metaverse in the gaming ecosystem. Here you can create, share and monetize assets and games. Similar to Decentraland, however, this project tends to appeal to a younger audience.

The sandbox metaverse is one of several blockchain-based virtual worlds that seek to change the dynamics of the gaming market and reward creators for the value they create through user-generated content.

SAND is an ERC20 token that powers the entire ecosystem.

Star Atlas is a blockchain-based gaming metaverse created using the Solana blockchain. The decentralized game is powered by real-time graphics, DeFi and multiplayer games, which enables hyper-realistic and interactive gameplay.

Since the inception of the Solana protocol, blockchain has managed to create an immense serverless and reliable gaming environment that Star Atlas seeks to exploit. Solana's unique protocol facilitates the gameplay connection between assets to be actively recorded and essentially skips the need for a robust traditional server for online multiplayer games like Star Atlas.

NFTs and crypto trading within the Star Atlas will be possible to build a strong in-game economy.

My Neighbor Alice (ALICE) is the native token of a farming game. The game is a world where users invest in digital islands, build things on those islands, and find new collectibles.

ALICE is an ERC-20 token that is based on the ETH network and can be earned in-game through events and competitions, among other things. The token also powers My Neighbor Alice's NFT marketplace and allows players to trade in and benefit from their creations.

The ALICE token offers players an incentive to participate in the farm building game My Neighbor Alice.

ALICE also stands for in-game items such as land or furniture that can be sold or rented to other players via smart contracts.

The ALICE token ensures that My Neighbor Alice is a free-to-start crypto game. Anyone can take part in competitions and slowly earn buyable amounts of ALICE. Or users can invest upfront and get instant access to certain game features.

Aurory is a play-to-earn game inspired by Axie Infinity. It is being actively built using the Solana blockchain. Aurory's goal is to create a game that will help users earn more from playing games and to help more people understand blockchain technology in a fun, fun, and easy way through games.

Aurory decided to build on Solana and partner with Serum DEX (Solana-based decentralized exchange). Aurory benefits from this as it can take on the low transaction costs and fast transaction processing speeds of the Solana network.

Aavegotchi is a DeFi-enabled NFT game developed by Pixelcraft Studios in 2020.

It is a crypto collecting game based on the Ethereum network where participants can create their own ghost avatars as NFTs and interact with the digital universe of Aavegotchi.

GHST is an ERC 20 token and is used for the governance and utility of the cryptocurrency token.

You will need GHST if you want to buy a ghost avatar or upgrade your own.

The Aavegotchi metaverse allows owners to purchase digital items, including wearables for their avatars, or to use them to vote and participate in game development.

You can then trade them on a secondary marketplace.

UFO Gaming is a project with a fully decentralized social gaming token, UFO. In the P2E-Metaverse (Play to Earn), Virtual Land, NFT and Gaming. The token is intended for participation in the IDO Launchpad for new Metaverse-based projects. All actions to participate in the project ecosystem require the $ UFO token.

Yield Guild Games (YGG) is a little different from the other Metaverse coins. It is the purely decentralized autonomous organization (DAO) for investing in non-fungible tokens (NFTs), virtual worlds, and blockchain-based games, all of which are connected to the Metaverse.

The organization's mission is to create the largest virtual world economy where YGG holders can benefit from the community's assets by sharing the DAO's profits with token holders.

YGG combines non-fungible tokens (NFT) and decentralized finance (DeFi) to bring Ygg farming into the gaming economy while adding value to these virtual worlds by developing the content and profitability of these games. The goal is to own and acquire assets in the metaverse.

Kalao is a recently launched NFT ecosystem on the Layer 1 blockchain called Avalanche that offers a user-friendly marketplace. Kalao wants to combine VR functions to improve the experience for users.

Kalao's Metaverse experience will make it possible to buy and rent land. As the owner, you can advertise your business in slots that you own. You can live stream a concert in spaces you own or rent, and then invite people and hang out with them.