The main events of the Bitcoin Conference so far

The world’s biggest Bitcoin conference kicked off this week on April 6th, Wednesday, and a lot of news is emerging from there. The event is being sponsored by several companies that develop solutions for bitcoin and users. The conference was opened by Miami Mayor Francis Suarez, along with other public members of the city’s mayor. Suarez gave a speech alleging the need to elect pro-bitcoin candidates, as well as stressing that the next president of the United States must be pro-bitcoin.

The mayor also stated that he is interested in increasing the adoption of bitcoin in Miami, as a fight against inflation to the fiat system (fiat system) and that the currency must be present in the lives of citizens. At the opening, the Miami bull was shown, with futuristic aspects, gold horns and laser eyes, elements that refer to bitcoin. The objective is to make Miami the new financial and technological center, leaving New York and Wall Street aside.

The first day of the conference, aimed at the industry, that is, companies and corporations that develop and apply solutions for bitcoin, there were no big news or announcements. 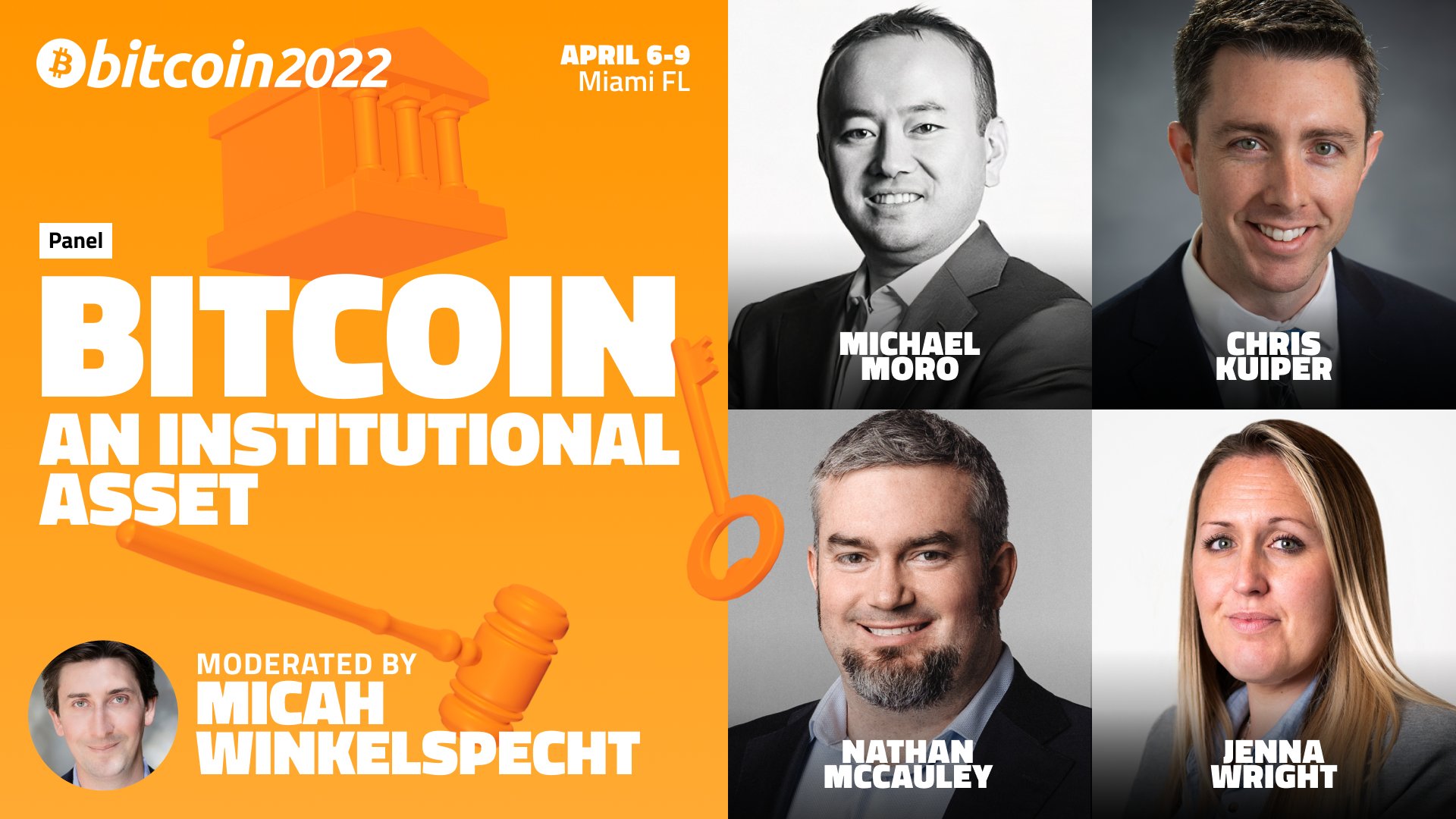 However, it was possible to perceive the advance of the institutional sector in the bitcoin market. In the panel “Bitcoin, an institutional asset” was talked about how big investors and companies see bitcoin today. Chris Kuiper, research director at Fidelity Digital Assets, said the company’s shareholders see the coin as a technology stock, and see great opportunities for growth. Natham McCauley, CEO of Anchorage Digital, also stated that today the company’s customers have a much more grounded bitcoin thesis and understand the currency better, however, they would like to see more De-Fi services within Bitcoin.

Nick Szabo and the Bitcoin Pioneers

An excellent lecture by Nick Szabo, jurist, cryptographer and creator of BitGold, served to explain the work of cypherpunks and the Austrian School of Economics that lasted for years and contributed to Satoshi Nakamoto masterfully developing Bitcoin. Szabo cited the creators and developers of the protocols present in Bitcoin today, such as the proof-of-work (PoW) mechanism, the Byzantine consensus and the timestamp system (timestamp) present in the blockchain. All this, unfortunately, cannot be seen by his time thinkers. However, it is present today in Bitcoin. 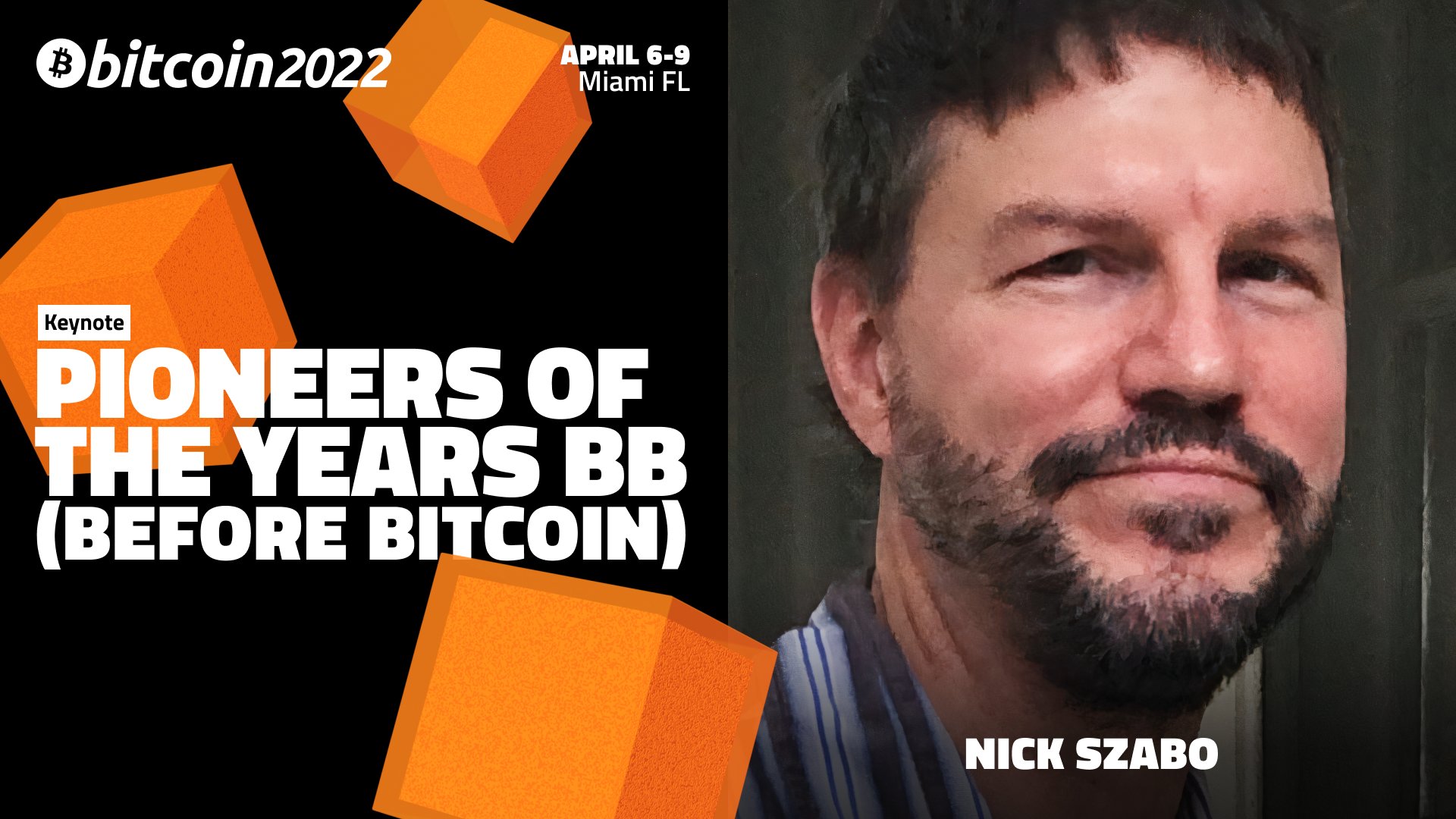 In a panel on the value of bitcoin, the S curve of technology adoption was shown, a famous curve that shows how people adhered to the various developments witnessed by humanity, such as the car and the internet. Bitcoin follows a similar path and it is estimated that by 2029 about 90% of American homes will use bitcoin. In the panel on global bitcoin adoption, the COO of Mercado Livre in Argentina talked about the top four countries with the highest bitcoin adoption, Brazil being one of them. By launching the bitcoin purchase product through their platform here in Brazil, in three months they had already reached 1 million users. This demonstrates how Latin American countries use alternative currencies because they are extremely affected by inflation and their countries’ financial system. With that, Charles Cascarilla, CEO and Co-founder of Paxos, stated that bitcoin is much more a store of value mechanism than a medium of exchange. In summary, on the first day there were also discussions between Bitcoin Core developers, who talked about defense mechanisms in Bitcoin. The panel on mining financialization showed how mining is being adopted by institutions and how companies in the sector are valued. Also, various discussions about what the future of the Lightning Network might look like, joining other tokens in the payment and mining channels, which can advance so much that all the people in their homes will be able to mine bitcoin in some way.

The second day of the event was the most anticipated, as it was the day of big known names in the market, such as Michael Saylor, Jack Mallers and Samson Mow, who made big announcements.

Samson Mow and Bitcoin Adoption Around the World 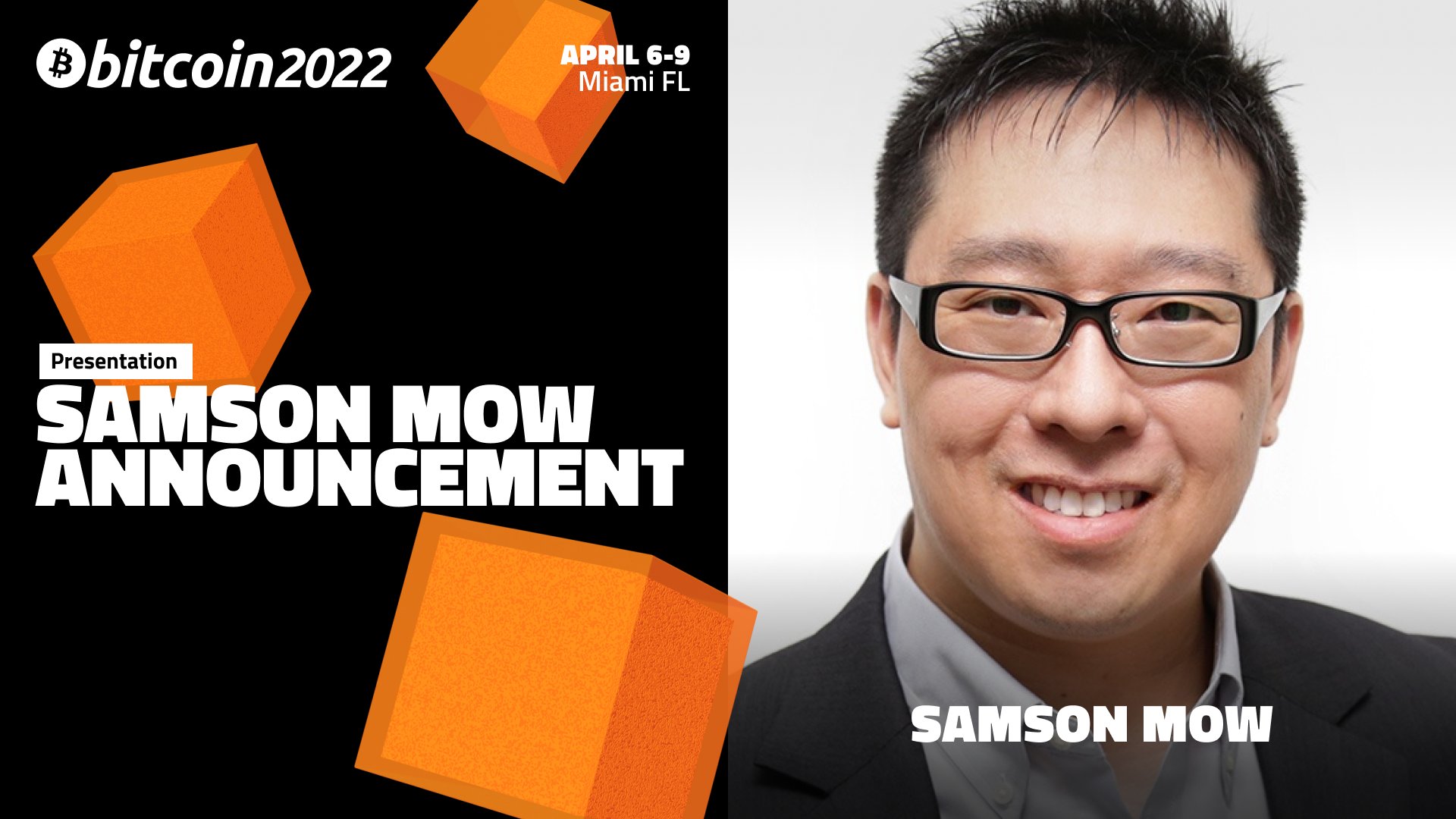 The most awaited announcement was that of Samson Mow, who highlighted the possibility of bitcoin as a legal tender, just like El Salvador, through Madeira Island, an autonomous region of Portugal and Prospera, a region separated from Honduras. Additionally, Prospera intends to be a jurisdictional ground for the issuance of tokens and equity within the Liquid Network. The region will zero capital gains taxes to promote business entry and facilitate the issuance of good bitcoin in the region. At Mow’s presentation, the senator from Mexico also appeared and said that she is in talks with the country’s president to implement bitcoin as a legal tender in the country. After all, Mexico is in a very bad financial situation and 67 million citizens there are unbanked, with bitcoin being a form of financial inclusion for these people.

Robinhood, an American financial services company that does not have a direct focus on digital assets, launched its wallet to more than 2 million “qualified” customers who were on the waiting list. In addition, the company will integrate its service with the Lightning Network, the bitcoin payment settlement network, making it possible to perform exchanges quickly and cheaply. The announcements were made by the company’s director of products, Aparna Chennapragada.

Michael Saylor: the future is prosperous!

Along with Cathie Wood, Michael Saylor explains why the future of Bitcoin is prosperous and how governments are increasingly open to the currency. They started by talking about political and regulatory issues, and how bitcoin is inevitable. Regulations imply currency volatility, but it has very solid fundamentals. However, Saylor claims he is more bullish than ever on bitcoin.

Ricardo Salinas and fraud in the traditional financial system 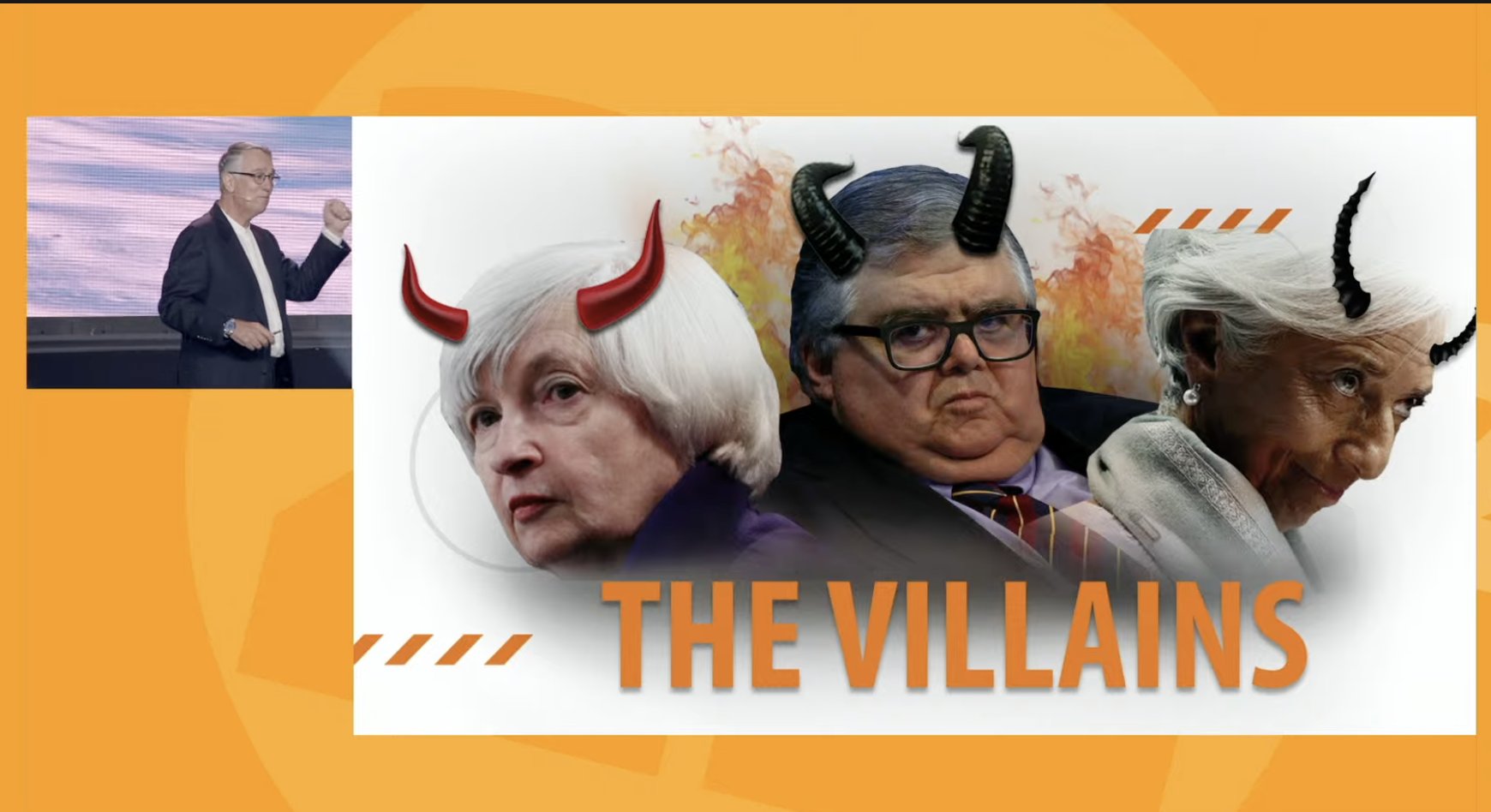 Ricardo Salinas, the third richest man in Mexico, a billionaire, was not afraid to speak up and, in fact, “let the word go”. Salinas said central bank governors should be jailed for crimes they commit against humanity. In addition, Salinas pointed out that the fiduciary system is a fraud, that people cannot maintain value in the currency and that the main victims of inflation are the poor, who do not have assets and shares. The fiduciary system only favors those at the top, such as politicians (Cantillon effect). Finally, with a catchphrase, Salinas told people to sell their shitcoins (bad currencies, like fiat currencies) and buy bitcoin. The panel on bitcoin as a mechanism of freedom talked about how people can use bitcoin today to get rid of wars and humanitarian problems. The panel was made up of activists from Nigeria, North Korea and Palestine, who lived through very sad moments in their countries. They talked about how fiat money finances wars and ends people’s lives with inflation, with bitcoin being a form of freedom struggle, as it is money free from any government.

Jack Mallers and the Big Announcement 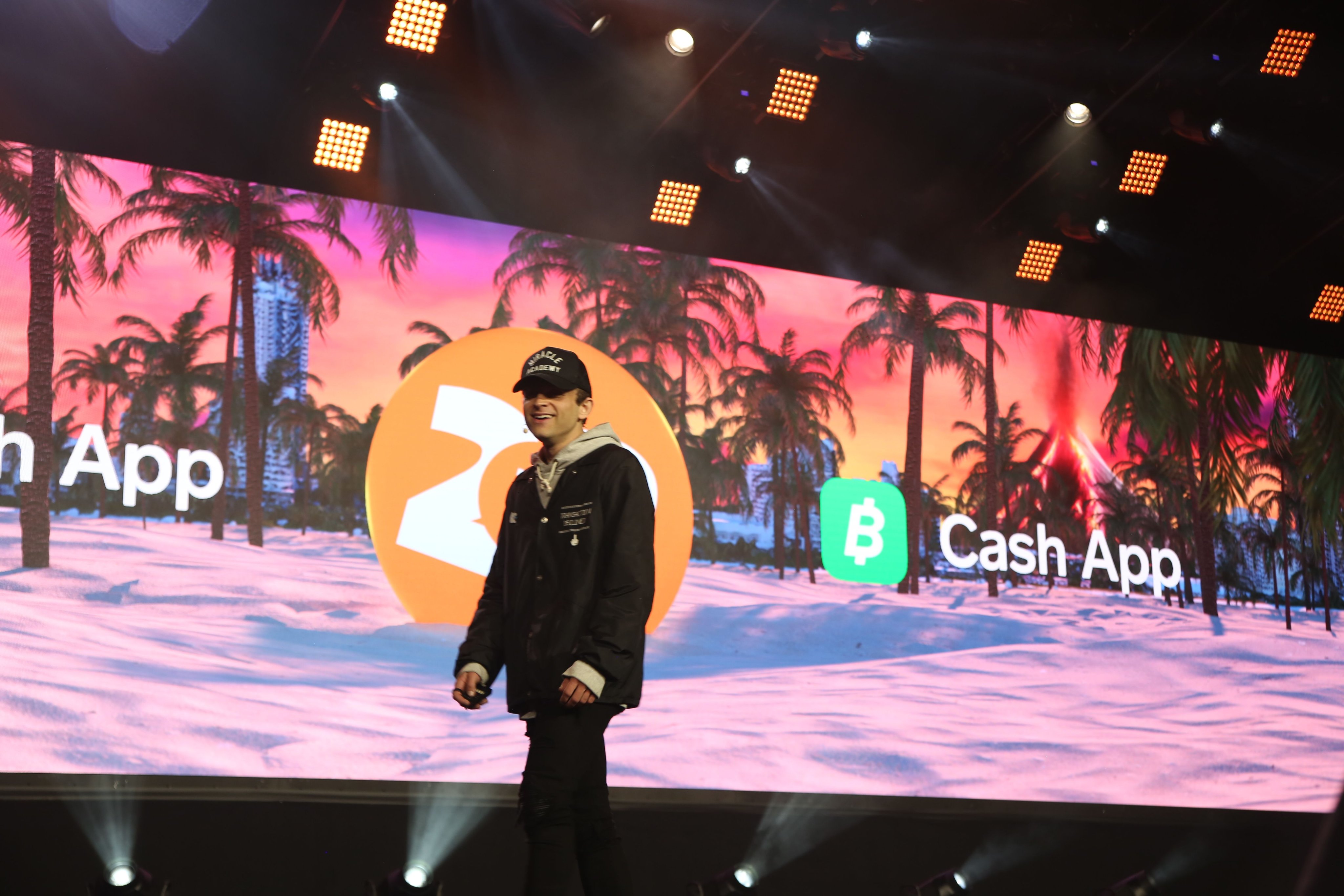 Undoubtedly, Jack Mallers’ speech was one of the most anticipated of the day. After all, in the last edition of the event, Mallers announced the adoption of bitcoin by El Salvador from the Bitcoin Beach project. However, at the event yesterday, Mallers showcased his work in partnership with other companies to focus on the usability of bitcoin. As such, the Strike wallet (whose Jack is CEO and founder) is now a Shopify partner and will allow multiple US merchants to accept bitcoin as payment, via the Lightning Network. In addition, Jack stated that NCR, the world’s largest provider of POS machines, and BlackHawk will accept bitcoin as payment. The event is being broadcast live on the Bitcoin Magazine YouTube channel and with Portuguese translation of the main lectures on the Explain Bitcoin YouTube channel. 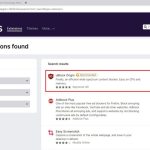 The valuation of Cardano (ADA) continues without respecting limits or resistance. The price of cryptocurrency soared over 13% this Monday (23) and has already accumulated […]

Tips for planning your dream trip

Planning a trip just to rest and escape the routine requires a financial plan, now to make that dream trip planning should have even more […]

Where to buy Cardano: ADA comes up with hard fork news Alonzo

With interesting enhancements to the Cardano blockchain, the ADA currency gained more than 46% in the last week. Read on to discover the latest Cardano […]