After losing more than 40% of its value in a few hours this Monday (9), the TerraUSD (UST) stablecoin has already become a subject in the American Congress. Trading at $0.91, still not resuming parity with the dollar after more than 24 hours, now the UST fiasco could accelerate the regulation of stablecoins. The information was brought to congressmen by Janet Yellen, the US Treasury secretary, who claimed to have read an article on the matter in The Wall Street Journal this morning. In addition to lawmakers, even prominent people in the cryptocurrency industry are concerned about “algorithmic stablecoins”. Three weeks ago, Vitalik Buterin, founder of Ethereum, noted that such coins are difficult to survive in the long term.

TerraUSD (UST) becomes a topic at the US Congress

When asked by Patrick Toomey, US senator, about the importance of regulating the stablecoin sector, Janet Yellen, US Treasury secretary, showed that she was up to date with the subject, bringing current information to the debate.

“I would like to note that there was a report this morning in the Wall Street Journal that the TerraUSD (UST) stablecoin has declined in value.”

“I think this simply illustrates that this is a fast growing product and there are risks to financial stability and we need a framework [legislativa] adequate,” concluded Janet Yellen. Therefore, the UST fiasco, in not maintaining parity with the dollar, could spill over into other stablecoins on the market, such as USDT, USDC, DAI, etc. At the time, Yellen also called for bipartisan support for these new laws covering these assets. Her speech can be heard in the 25th minute of the video below.

One of the main differences between TerraUSD (UST) and other stablecoins on the market is how it works. While others hold cash assets to back up their coins, the price of UST is maintained by an algorithm that seeks to maintain the coin’s price based on incentives when its value is falling. However, Vitalik Buterin, founder of Ethereum, was skeptical of algorithmic stablecoins, almost anticipating the event. According to Buterin, only USDC, RAI and DAI would be needed in the market.
“Many newbies judge a stablecoin as, for example, ‘if the price of a stablecoin is between $0.99 and $1.01, then it’s good'”said Vitalik Buterin three weeks ago. “This mentality is totally wrong. Because whether a stablecoin goes up and down 2% or 0.2%, that’s not a role of how good that stablecoin is, it’s a role of how good the market maker is.”

“And anyone can hire a good market maker [market maker] for a short time.”

UST looking ugly. 😬 Did @VitalikButerin predict this? This is from three weeks ago… pic.twitter.com/iabMvHgQLr
— Bankless 🏴 (@BanklessHQ) May 10, 2022

Although other stablecoins have assets as a reserve, it is notable that these companies do not keep these amounts in dollars deposited in banks, but in paper (stocks, bonds, etc). Therefore, mainly due to the lack of transparency of some of them, it is impossible to know if there is really ballast, as well as there are other risks, such as loss of value in their investments that, obviously, will not be reported to the public. Currently, four of the top ten cryptocurrencies on the market are stablecoins (USDT, USDC, BUSD and UST) and these alone represent 165 billion dollars (R$ 844 billion) in market capitalization. So while the US has been eyeing these stablecoins for quite some time, it is possible that TerraUSD (UST) has accelerated this process. 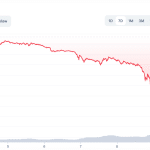 The topic of cryptocurrencies continues to make its way into the mainstream. Most recently, CNN featured Brad Garlinghouse, CEO of blockchain-fueled cross-border payments startup Ripple, […]

5 opportunities to make money at Arbitrum

Arbitrum, Ethereum’s largest layer 2 blockchain, has been prominent in the DeFi space with $2.32 billion in total locked-in value. The platform offers various products […]