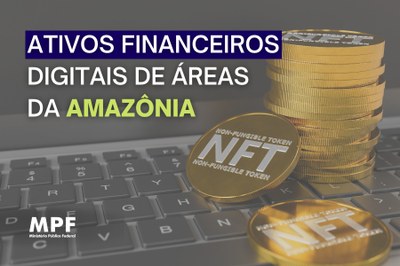 The Federal Public Ministry (MPF) launched an inquiry to investigate the sale of NFT by a company in the Amazon, which claims to own land in the region. The investigation began after complaints from indigenous people living in the south of the state. The invasion of indigenous lands in recent years has been one of the biggest problems that Brazil has presented to the world. In a recent case, with the death of the journalist Dom Phillips and the indigenist Bruno Pereira, FUNAI issued a note to comment that it barred the creation of an Indian cryptocurrency to use the resources in areas of preservation of the peoples. However, in early July, the Federal Police launched Operation Greed and arrested the leaders of an illegal gold mine, which was occupying indigenous lands without authorization. This same group even created a cryptocurrency for money laundering, being caught by the investigation.

MPF investigates company that sells NFT from the Amazon, after complaints from indigenous people

Last Monday (25), Brazil saw the first investigation launched against a company that sells NFTs in the country, this one operating in the Amazon.
MPF investigates possibly illegal sale of NFT in the Amazon. Disclosure. Called “Nemus”, this startup sells NFTs to supposedly protect and conserve the Amazon, considered the largest rainforest in the world and one of the most biodiverse ecosystems on the planet. In addition to collectibles, the company plans to launch a themed NFT game, as well as a DAO to manage its ecosystem, which works with NEA tokens. One of the plans of the ambitious project would be to create a DeFi for the so-called “guardians”, as the project’s NFT and token holders are called. The company Nemus claims to have an area of ​​41,000 hectares of forest in the Amazon, and has pressured the Indians who live in the region with unhealthy practices, informs the MPF.

“In the case of the NFTs offered by the company Nemus, the sale would supposedly be linked to environmental services that, however, are not properly explained. The company claims to own 41,000 hectares of forest in the state.”

In its investigation of the case, the MPF spoke with Apurinã leaders, who live in the Baixo Seruini/Baixo Tumiã indigenous land. According to the leaders, the company Nemus has put pressure on people and is violating their rights in order to continue selling NFTs. One of the problems is that Nemus wants to explore the chestnut groves in the interior of the indigenous territory, opening an airstrip and a road that connects to the municipality of Pauini, using heavy machinery. However, no clarifications or documents are presented that authorize it to perform the service issued by Brazilian public bodies. In order to continue operating, Nemus would have delivered signs in English to the Indians and led them to sign documents, even though many of them could not even read. A copy of the signed documents was not provided to the people, the MPF said. In a note, the public investigation agency asked FUNAI to complete the land demarcation report, so that within 15 days it will be informed why there was a delay in disclosing the instrument that has been ready for several years. The Indians claim that the president of the institution is already aware of the situation, declared the Public Ministry.

NFT company has 15 days to explain itself to the MPF

In addition to the deadline given to FUNAI, the MPF also gave Nemus 15 to prove that it owns the land it claims to own, in addition to informing what type of exploration it intends to carry out in the region. It is noteworthy that if the NFT company has not consulted the local peoples of the Amazon, it may be failing to comply with the requirements of Convention No. 169 of the International Labor Organization (ILO).

“The company must also, within 15 days, clarify the projects published on the internet and the type of exploration it intends to carry out in the Pauini region, presenting any document, authorization by the National Indian Foundation (Funai) or another public body to activity in the area.”

O livecoins approached Nemus to comment on the MPF investigation, but received no response at the time of writing this article.