Is Algorand a good investment? 5 reasons why we think it’s

Algorand is a leading blockchain project that seeks to become the greenest platform in the world. It is a chain of smart contracts that uses the Algorand Virtual Machine (AVM), which offers numerous possibilities for project scaling and acceleration. According to its website, Algorand can handle over 1,000 transactions per second (tps).

Algorand is one of the largest smart contract platforms in the world. According to CoinGecko, it has a total market capitalization of over $4.7 billion. Like most digital currencies, ALGO has not had a good year as its price has dropped by more than 60%. It is also down more than 77% from its all-time high and is trading near its lowest level since February 2021.

There are numerous reasons why Algorand’s price has plummeted in recent months. First, there are the significant risks about the Federal Reserve taking a more aggressive tone. In fact, the bank has already done this by implementing two interest rate hikes. The most recent rate increase took place in May and was 0.50%. The bank also decided to continue raising interest rates and implementing quantitative tightening policies. Historically, cryptocurrencies like Algorand tend to underperform in a period of high interest rates. Second, Algorand has struggled due to increasing competition and the fact that its ecosystem is slightly smaller than its peers. Some of Algorand’s biggest competitors are Ethereum, Cronos, Solana and Cardano. While these networks have a total locked value (TVL) of billions, Algorand has a relatively lower value. With that in mind, let’s look at some of the top reasons why Algorand is a good investment.

Algorand’s exhibition at the World Cup

The World Cup is one of the biggest sporting events in the world, with billions of spectators worldwide. Recent data shows that there were more than 1.1 billion spectators at the final between France and Croatia. This is a significant number considering the world has a population of over 8 billion. Also, the World Cup is watched by more people than those who watch Formula 1 and the Super Bowl. In May 2022, Algorand announced that it had signed an agreement with FIFA to become a major sponsor of the World Cup. As a result, your logo will be seen by millions of people all over the world. At the same time, FIFA will use Algorand technology to create its blockchain initiatives as Non-Fungible Tokens (NFT). Therefore, we believe that the Algorand price will see a steady recovery during and after the World Cup event. This will happen as more people decide to buy the currency during matches. However, while it is a good catalyst, it is worth noting that the cryptocurrencies that have appeared at most events have only had a temporary boost. For example, Cronos, formerly known as Crypto.com Coin, saw only one mode gain when the company sponsored the Super Bowl.

Algorand is a good investment given its growing ecosystem in general. Like Solana and Avalanche, Algorand has been adopted by all types of developers. These creators are building applications across all industries, including Automated Market Makers (AMM), analytics, decentralized autonomous organizations (DAO), DEX, governance, oracles, and NFTs, among others. The catalog of all apps created on Algorand has been growing rapidly in recent months. Some of the most popular blockchain platforms created using Algorand are AlgoFund, AlgoLaunch, Choice Coin, Algofi, Flex NBA, The Drag Racing League, and Folks Finance, among others. While most of these projects are in their infancy, there is a likelihood that they will continue to grow for years to come.

It is a proof-of-stake platform

The other reason Algorand’s price will continue to do well is that it was built using pure proof-of-stake (PPoS) consensus. This is a protocol that allows for the minting of new coins through the use of validators. It differs from a proof-of-work methodology, which allows coins to be created by solving complex mathematical solutions. Proof-of-stake is considered a better approach, which explains why Ethereum is moving from its PoW platform to PoS. There are several benefits of Algorand being a PoS platform. First, it allows investors to earn a return by simply holding the currency. This process, known as staking, allows people to earn up to 12% APY. Second, it makes Algorand significantly faster. It can handle more than 1,000 transactions per second, while Ethereum can only handle less than 20. In addition, Algorand’s PoS system helps ensure it’s climate-friendly. In fact, the platform uses ClimateTrade to offset its carbon footprint. ClimateTrade is widely used by companies looking to reduce their footprint.

In addition, Algorand is widely provided by most brokers and exchanges. It is available on major centralized exchanges such as Coinbase, Crypto.com and Binance. These are some of the most popular bags in the world. At the same time, it is possible to buy and trade Algorand on major decentralized exchanges like Uniswap and PancakeSwap. Learn more about trading cryptocurrencies.

Algorand has a strong community

Finally, Algorand has one of the largest communities in the blockchain industry. Its main Twitter account has over 250,000 followers, which is higher than most cryptocurrencies. Also, a closer look at its network shows that it has millions of wallets. At the same time, Algorand launched a $250 million donation program to incentivize developers. Previous Article How to add custom ringtones on iPhone 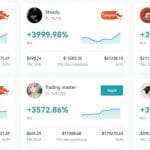 A couple of years ago, as cryptocurrency became all the rage and scams abound. The giant social media advertising platforms banned cryptocurrency ads. Facebook issued […]

How to remove iPhone screen lock

The solid union of football and cryptocurrencies: know where to buy FWC

The FWC is the symbol of a project called the Qatar 2022 Token whose popularity is skyrocketing as the World Cup approaches. 1 FWC might […]

Blockstream, Tesla and Block partner to use clean energy in Bitcoin mining

Bitcoin 2022 also received important announcements in terms of clean mining. This Friday (8), the two main ones came from Blockstream and Canaan Mining. Both […]