The games are inserted in our reality, therefore, they managed to guarantee the consolidation of an extensive virtual industry, extremely profitable, where its developers are, at all times, looking for new updates, whose purpose is to stand out in this promising market. With the advent of computers, the possibility of formulating “games” in programming languages ​​of the time also emerged. Thus, the opening of the games market started in 1962, with Espacewar, a simple and innovative spaceship game, produced for two players, whose objective was to destroy the opponent’s spaceship. 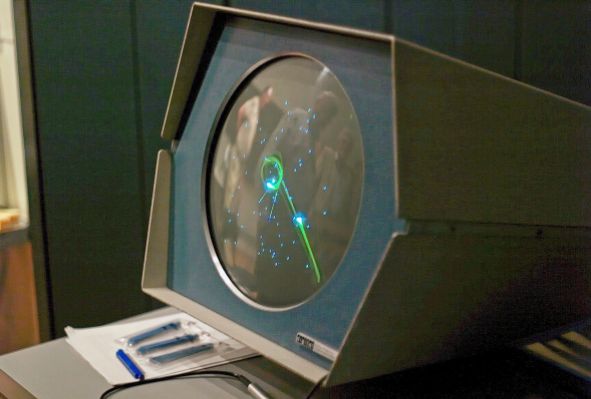 SpaceWar on a computer of the time.

From the emergence of the blockchain, we managed to change the way we use certain media, resulting in a disruption of traditional games.

Our life changed in more than one way, with this, the possibility of cryptographic games, known as “play-to-earn” was seen. As much as the possibility to play and still win money is great, the reality is that there are still problems to be solved so that they really compete in the traditional gaming commerce.

Cryptokitties platform home tab. CryptoKitties was the first game really known on the market, with a gameplay in which users could own, trade and raise their “kittens”, these being the only accessories in the game. The results of this are: a generation of people using this new market to commercialize domains of a work, with ownership and voluntary exchanges between individuals, as in the case above, to have control over their charter.

NFT’s are well used in blockchain games, its acronym means non-fungible token, that is, it is a non-fungible token. It is a technology that allows you to validate and acquire ownership of digital assets. In other words, it means being a unique asset and a great example of this are works of art. Because, even with the possibility of reproducing the image, in cups, dish towels, t-shirts, among others, Michelangelo’s painting, The Creation of Adam, has a SINGLE role in the historical process, thus being a non-fungible, different asset. of any replication as engraving.

“The Creation of Adam” is located in the sixth section of the vault of the Sistine Chapel. On the other hand, there is a fundamental difference between non-fungible token and cryptocurrency. In economics, a fungible asset is money (cryptocurrency), as there is the unity of being easily exchanged and having several identical pairs, such as countless 2 reais bills. With this, it is observed in blockchain games the possibility of permanence of domain by a piece (non-fungible token), whether in games, in art format, or even in tickets. In addition, it creates a rate of speculative investors, as they use purchases in an attempt to sell for a value above what they acquired.

Advantages and Disadvantages of NFT Games

As such, NFT games are quite popular right now. However, they have advantages and disadvantages that will be described below:

Certain individuals like the power of exclusivity over a particular product, no wonder there are RPG cards with catastrophic values ​​on the market. An example is Pokemon cards, such as Charizard sold for $311,800. This is the heart of the matter, since the price of RPG cards are not linked to the intrinsic value, but to the value that a certain group of people attribute wanting to have the original card, being a unique and collectable asset, however easily it is replicable. 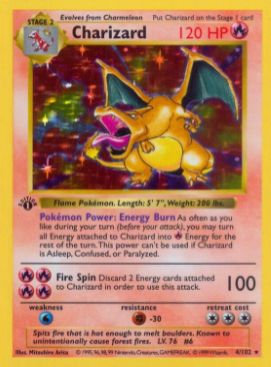 1st Edition Charivari card is one of the rarest cards in the world. As trading tokens are non-fungible, since they are blockchain-based, they cannot be changed or deleted, bringing a unique value to the games, as it allows authenticity in each asset acquired in the games.

Currently, everything related to NFT games seems to be perfect, but there are downsides to be pointed out. Speculation about supply and demand. As it is a new and growing market, each investment is still a principle of expectation that new individuals will give a price above what you previously gave, buying in the hope of the asset’s appreciation. A practical example is the game CryptoKitties, mentioned above, in which a large number of players, who arrived during the explosive growth stage, generated a large number of kittens in a short period of time. On December 4, 2017, the number significantly exceeded the amount of cards sold daily, which resulted in few kittens remaining for sale. This created an intensification of competition among game buyers, thus causing a decrease in successful sales on the day, as sellers were always prolonging the sale, expecting more appreciation or an above-average price when there were no buyers available to purchase. 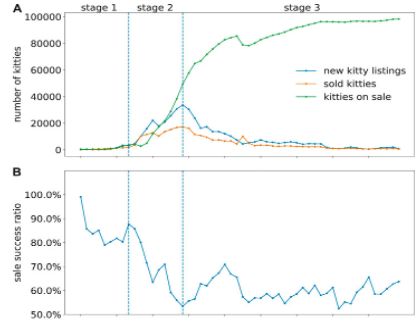 Graph that can observe supply and demand (A). The proportion of successful sales (B). Assets can be copied The existence of a digital asset makes it unique in the blockchain, such as the work Monalisa, which has only a pioneer and definitive version, however, this in no way inhibits numerous replicas in the market. For some, digital assets have a value equivalent to physical works of art, importing only the original work and all its value given by the creator, historical relevance and aesthetic attributes. Therefore, digital assets are easily replicable, in identical format to the original, changing only the domain.

Thus, the current market, as described, is still embryonic compared to traditional games, as it is recent and has a lot to explore. However, a good part of the initial investments require a high cost and a good part enters the games not for the ordinary, to have fun/compete, but with the expectation of good profits, actually speculating to win cryptocurrencies or trading the NFT at a price above the initially bought . The current model is not as fun as mainstream games, with the difference that blockchain games also require certain knowledge, such as: setting up a wallet, storing cryptocurrencies, trading and selling. Until there is such a popular understanding, it takes time, so it’s pretty uncertain how it will all play out. The market is seen as revolutionary by the play-to-earn model, so it is necessary to be careful who is entering this new scenario.