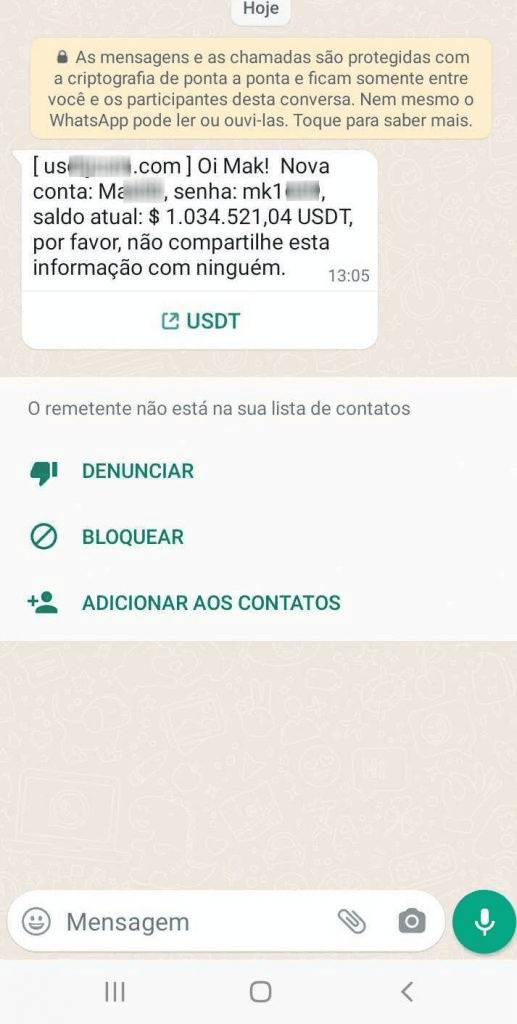 Fake cryptocurrency exchanges have caught the attention of ESET security experts, who have observed several attacks on victims. And several of these scams are being spread by WhatsApp, according to the security company, by false contact numbers. Currently, according to Triple A, there are 10 million cryptocurrency investors in Brazil. In other words, with a high number of people involved with the market, many are looking to learn about and expose themselves to financial innovation. However, as it is a new technology, there is room for scammers to exploit this interest in order to obtain returns with scams. Thus, in addition to studying the technology, investors should be aware of false promises and suspicious links.

Brokers, or exchanges in English, are platforms that allow those interested in buying and selling cryptocurrencies easier access to practice, by providing liquidity in trading. But ESET discovered that fake cryptocurrency exchanges are being created in the market, one of them being Mak88. The platform has been presented via WhatsApp and Twitter to investors, through suspicious links that arrive in messages from unknown contacts.
Message received by WhatsApp with a proposal for investments in cryptocurrencies. Reproduction By entering the link provided by the fake numbers, victims are informed that the platform has $1,034,521.04 USDT for trades, a high amount that would supposedly support the operations. Part of the page’s content is in Portuguese, that is, it seeks to capture Brazilians.

Fake cryptocurrency exchange discovered by Brazilian experts. Reproduction The victim even earns their own platform tokens, which is a measure that criminals created to convince the victim to register with the fake cryptocurrency exchange. At this stage, various personal data are collected from the victim, which increases the danger of the scam. According to ESET, the scam uses a lot of social engineering to convince victims to click on links, provide data and even buy investment packages, but this is all a scam by one of the fake cryptocurrency exchanges that was discovered. Daniel Barbosa, an information security specialist at ESET, explains that one of the details to be identified is precisely the security padlock of these fake sites.

“We verified the details of the link sent by the scammers and found that, even with a security padlock, the domain used by these sites is not known and that the digital certificate informs that the page was created the day before the message was sent on WhatsApp . This is one of the first signs that this is a scam.”

And investors should also be concerned about another possibility, fake cryptocurrencies, which are created daily in the market. Some of the most famous scams bear the name of ‘Bitcoin’, such as “Bitcoin Loophole”, “Bitcoin Revolution”, “Bitcoin Code”, among others that have fake pages spread across the internet, often using the image of famous people. Investing and buying bitcoin is not a complicated task, but if the investor looks for schemes that promise quick gains, it is possible to fall into financial fraud. Internet scams are even more difficult to get hold of, as many are not created in Brazil.