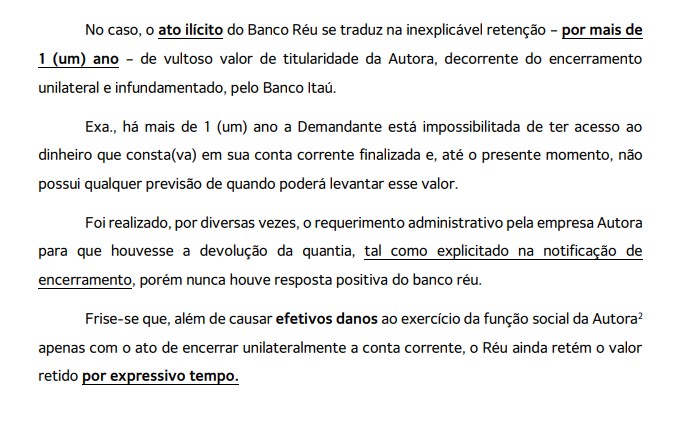 The digital bank Capitual is filing a lawsuit against Itaú after having its account blocked and not being able to recover its money arrested. In Brazil, several cryptocurrency brokers have already had their accounts closed in traditional banks, but never a digital bank. Due to this situation, a lawsuit is being filed at Cade by an association that represents some cryptocurrency companies against banks. Among the allegations of cryptocurrency exchanges, banks are practicing unfair competition and this conduct should be analyzed by the government. In April 2022, Cade again postponed the decision on the dispute between banks and exchanges.

Capitual combines the characteristics of a multi-currency digital bank and serves several foreign brokerage firms operating in Brazil. In this way, the company considers itself a hybrid digital bank, being one of the first in Brazil to facilitate the integration of cryptocurrencies with the traditional market. Until this June, Capitual was responsible for releasing the withdrawals in Real from Binance, but after a disagreement, the companies broke the relationship. Before that, however, the Capitual had to seek the Justice of São Paulo to trigger the Itaú bank, which in 2021 blocked its account with more than R$ 80 thousand deposited in it. By blocking Capitual’s account in March of that year, Itaú said it was acting in accordance with the rules of the Central Bank of Brazil. Capitual tried to recover the money arrested amicably in the last year, but Itaú refused to release the amounts according to the initial petition sent to the judiciary for the defense of the digital bank.
Defense of the Capitual accuses Itaú of causing damage by withholding money for more than a year without giving an explanation. Excerpt from the process obtained by Livecoins. In court, the Capital asks for the return of the corrected amount and more payment of moral damages. Itaú has not yet manifested itself in the process opened a few days ago, but should be called to clarify why he unilaterally closed the digital bank account. In recent months, Itaú has even revealed plans to release the trading of cryptocurrencies in cash for customers, after making investment products available in this sector.

In addition to having to face Itaú, which closed its account in the last year, Capitual is also fighting a battle against its former partner Binance, which even filed a lawsuit demanding that the company’s service be provided. However, after a decision in the second instance of the process, which runs in secrecy in the State of São Paulo, Capitual managed to be exempt from continuing to provide the service to Binance. Currently, Capitual acts in the intermediation for Huobi and KuCoin in Brazil, although Binance claims that there was a failure to provide the service and has announced a partnership with Latam Gateway, which is still in the process of integrating services and clients of the giant brokerage continue without withdrawing amounts in Real. After this article was published, Binance sought out the livecoins and sent a note about the case.

“Binance highlights that Capitual is no longer its payment provider. On June 24, Binance announced that it has signed a contract with a local partner more committed to its values ​​and to Brazilian users. With the move, Binance will offer a better solution for clients while conducting the process of acquiring local brokerage Sim;paul, a company authorized by the Central Bank and the Securities and Exchange Commission (CVM), announced in March.”