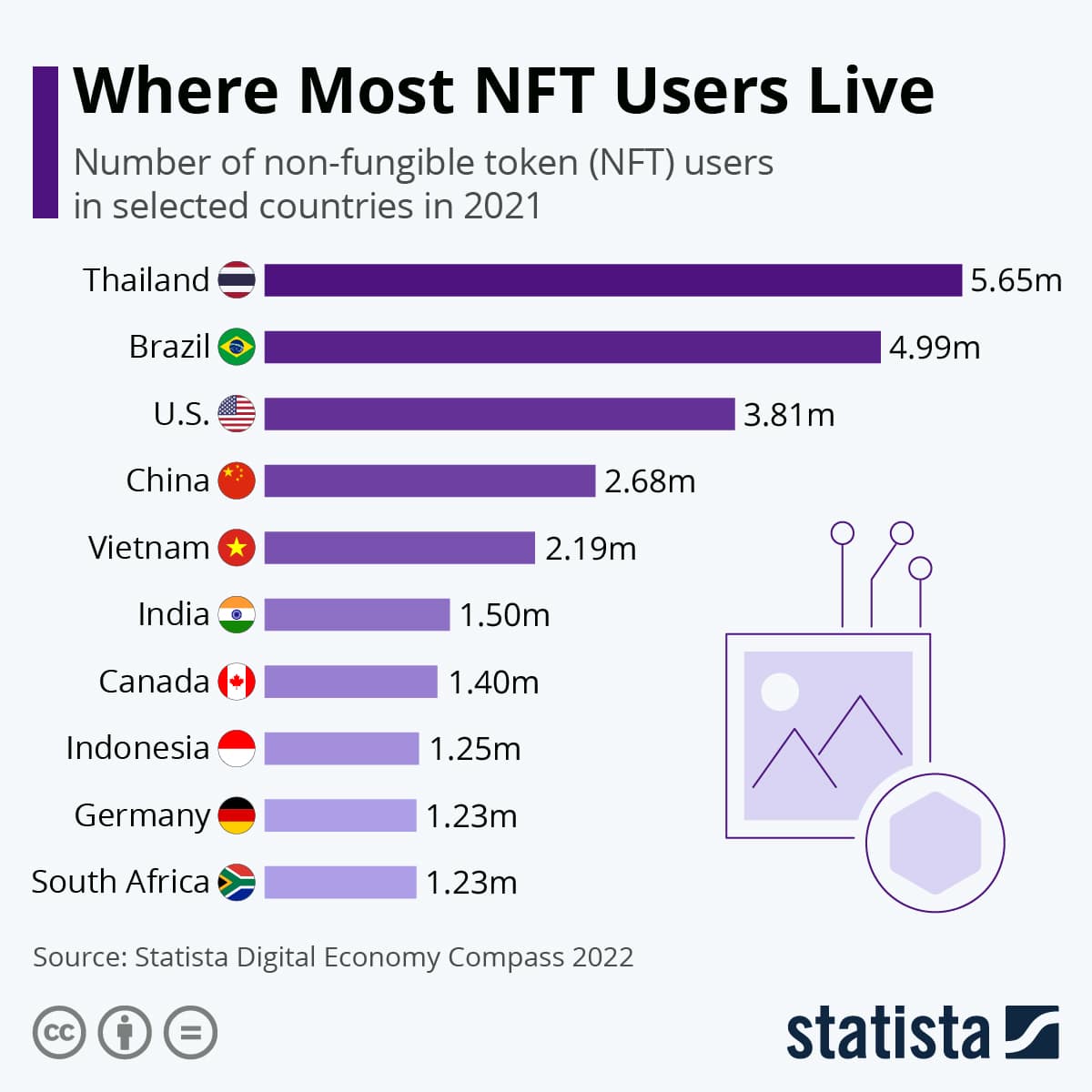 Non-fungible tokens (NFT) gained greater notability in 2021, when several projects gained prominence in the cryptocurrency universe. Among the most famous NFTs are those from the Cryptopunks collection and Bored Ape Yatch Club (BYAC). Far from being something just for enthusiasts of the crypto universe, NFTs have reached celebrities from all over the world, such as Justin Bieber, Madonna, Neymar and even brands, such as Gucci, who are implementing their products in NFT format to be used in the metaverse. As a result, Brazil gained prominence among the number of holders of these digital collectibles. Which is not a surprise, as the country is among the biggest investors in the digital market.

Brazil ranks 2nd in the number of NFT holders

Statistics and data company, Statista Digital Economy Compass, surveyed where most NFT users lived. The data may surprise some, putting East and Southeast Asian countries at the forefront of NFT trading in 2021.
Where most NFT users live. Source: Statista. Thailand takes the lead, having 5.65 million users. Followed by Brazil, with 4.99 million. Although the United States has a very popular market, due to several companies located in the country, it ranked 3rd, with just over 3 million users. Although Brazil occupies the second place in this ranking, in relation to the number of the population, only 2.33% are digital collectors, in contrast to Canada, where 3.67% of the population collect digital assets.

What is an NFT?

NFT, or, Non-Fungible Token (Non-fungible Token) is a digital collectible, characterized by being unique, so it is not fungible, that is, it cannot be exchanged for another NFT. Therefore, these collectibles can be files of images, videos, music, among other items, which have a unique digital record on a blockchain. Therefore, it is possible to verify the authenticity of this asset. In 2021, the NFT market grew by more than $41 billion, according to data from Chainalysis. The digital collectibles market has almost rivaled that of traditional arts, which raised $50 billion in 2020, for example. Despite this market’s growth, NFT trading has been slowing since last month, with NFT sales dropping to a daily average of 19,000. The numbers show a 92% drop from the peak trading period, which reached 225,000 in September 2021, according to information from the World Street Journal.

What does this data show us about the Brazilian cryptocurrency scenario?

Brazil is one of the largest crypto trading countries, information from Chainalysis shows Brazil among the top 15 crypto trading countries in 2021. Being the largest country in Latin America in trading. However, these data show us that the country trades digital assets more speculatively, not out of necessity. Unlike what happens in Venezuela, for example, which, taken by a collapsed financial system, saw cryptocurrencies as the only alternative to state money. Although Brazil is also heading towards a period of financial crisis, mainly due to the measures taken during the COVID-19 pandemic, it is observed that investors in the crypto market still have speculative biases and with the need for a quick gain when investing into dubious cryptocurrency projects. Therefore, these data show us that, despite being mature in terms of the number of trades, mentally, Brazilian crypto investors still need to mature in their financial allocations.