Bitcoin Beach: an experience with Bitcoin in Jericoacoara

To the northwest of the state of Ceará, located about 300km from the capital Fortaleza, is the paradisiacal village of Jericoacoara. A paradise on the coast of Ceará, the beach has fishing, surfing and kitesurfing as its main attractions. However, the bucolic village has recently gained an extra attraction, especially for bitcoiners. It was here that one of the most innovative and exciting experiments in the Brazilian Northeast began: Bitcoin Beach.

Running an experiment like the @BitcoinBeach but in Jericoacoara CE/Brazil. Using BlueWallet, with our own #Bitcoin and #Lightning Full Node, we’re ready to become the second Bitcoin Beach in the world by helping the community to create a new Local Bitcoin Economy #bitcoinbeachbr
— Motolese 👽🖖 (@MotoleseOficial) October 3, 2021

Inspired by the success of Bitcoin Beach in El Zonte, El Salvador, businessman Fernando Motolese chose the famous beach in Ceará. In fact, the project was originally called Bitcoin Beach Brasil, but had its name changed to Bitcoin Beach. The objective, however, is the same: to provide tourists and micro-entrepreneurs in Jeri, as the beach is affectionately known, with a universal and decentralized alternative for payment for their services. But can the northeast coast flourish and become a hub in the use of BTC as a currency? CriptoFácil pursued this answer through a partnership with Gabriela Barreto from Ceará. Lawyer, teacher, writer, columnist and strong enthusiast of blockchain technology, Gabriela was on site and experienced the use of BTC as a currency, in addition to talking with the organizer and local traders of Praia Bitcoin. Therefore, this article will be divided into two parts. In the first, the organizer of Praia Bitcoin tells how the idea came about, its implementation and the results obtained so far. In the second part, Gabriela tells her experience in practice through the use of BTC in Jericoacoara and also in conversations with local residents and shopkeepers.

Fruit of the quarantine

According to Motolese, the idea for the project began to be born during the quarantine caused by the Covid-19 pandemic. The businessman is from São Paulo, however he has lived in Jericoacoara for two years and has created a strong bond with the local community. In this sense, Motolese identified a major problem: the complete absence of banks in the village. Yes, although Jericoacoara received almost 670 thousand tourists between 2019 and 2020, the city does not have any bank branches. The case was even worse for the residents, who had to travel in order to go to a bank branch. With this absence, Motolese decided to look to the future and choose Bitcoin (BTC) as a tool for financial freedom. And all this took place on a very symbolic date. “Our micropayments experiment began on September 8, 2021, the day after El Salvador adopted Bitcoin as legal tender. Since then we estimate that over 120 users have created wallets and received small amounts of bitcoin. In addition, about 15 establishments have started to receive bitcoin as a form of payment,” he explains. Motolese explains that he initially tried to contact the Bitcoin Beach organization in El Zonte, but received no response. Thus, he decided to start the project little by little, even without this support, however, in January 2022, Bitcoin Beach and Galoy Money, developer of the wallet used in El Zonte, donated 0,042 BTC to the Brazilian initiative.

We received another 2.1 million sats in our crowdfunding campaignhttps://t.co/NmmsROXfYy Considering the tweet bellow, it can be a donation from @BitcoinBeach complementing @GaloyMoney initiative If confirmed, we will be more than happy to get support from who inspired us 🖖 https://t.co/BecvItab1b — Praia Bitcoin #BitcoinBeachBR ⚡ (@BitcoinBeachBR) January 16, 2022

And really support was something the project took a while to get. Praia Bitcoin had an initial donation of only 0.02 BTC, about R$ 6,000 (Six thousand reais) price when the experiment was created. To give you an idea, Bitcoin Beach started with 12 BTC. But this did not dampen the enthusiasm of the project organizer, on the contrary. With this initial donation, the first support was given, mainly aimed at residents and small entrepreneurs in the region. “We help street artists, artisans, street vendors and villagers gain access to Bitcoin. In addition, we run our own Lightning Node and Bitcoin, providing a point of contact between our community and the world community”, explains Motolese.

The character of Praia Bitcoin reveals an innovative trend of the cities of the Northeast in the cryptocurrency market. Recife, capital of Pernambuco, has a major hub in this regard, while small Aracaju, in Sergipe, was once the Brazilian city with the most establishments that accepted BTC as payment. Part of this pioneering spirit is caused precisely by the problem identified by Motolese. As data from 2019 show, of the 45 million Brazilians who do not have a bank account, 39% live in the Northeast. That is, the region is the one that suffers the most from a lack of banking services – something that BTC emerged to fix.

“Our focus has always been social work, taking bitcoin to the unbanked and realizing the technology’s maximum potential, using it as a form of inclusion. As it is a tourist location, shopkeepers end up using it as a marketing tool to attract tourists and foreigners”, explains Motolese. “The people here in the Northeast are prepared for the new, and we have a perfect environment with endless opportunities. I don’t believe there will be a mass adoption of other cryptocurrencies, I only believe in Bitcoin as an alternative form of money. With the help of Lightning, Bitcoin can soon reach the four corners of the world, the other cryptocurrencies cannot, as they are copies, and will always be Bitcoin counterfeits, with some innovation, but without sufficient relevance to serve the entire mass of the population and offer the security that Bitcoin offers”, he concludes.

And now, it’s time to check out a full and practical account of the experience of using BTC at Praia Bitcoin.

Gabriela Barreto was delighted with the number of local entrepreneurs and merchants who joined the project practiced by Motolese in the village, opening up new global business opportunities, as well as they seek to study cryptocurrency investments from the safe and fast operation, its high and down in the financial market, instructing and educating society as a whole. According to the lawyer, the Bitcoin Beach project obtained a great support from the community. In this sense, commercial initiatives, between establishments and services, already use BTC as a means of payment. And this acceptance is not limited to large services. Craftsmen, street vendors, bakeries and beach huts have also engaged in the use of cryptocurrency. Renowned restaurants, cafes, ice cream parlors, supermarket, bakery, nightclubs, beach huts, cocktail shakers and inns, ditto.

Even social projects have moved in this direction. In the case of Praia Bitcoin, support for an educational social project of a surf school to help needy children and teenagers in the region who receive donations when accepting Bitcoin. As a result of the initiative, the beach has attracted the attention of many people who seek to understand how this ecosystem works. This was the case of two digital nomads who were present at the famous restaurant owned by Dona Amélia, one of the most famous among those who accept BTC. Payment for our dinner was made entirely with BTC. 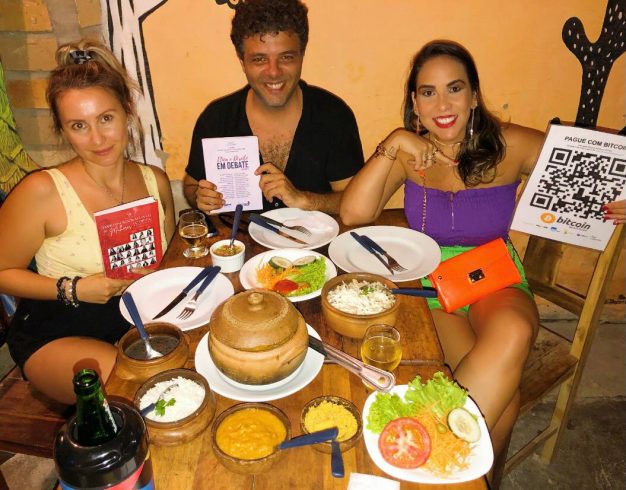 Currently, Praia Bitcoin is the pioneer and most successful example of its kind in Brazil. Even with little support, the project has thrived and helped change the lives of dozens of people, as well as inspiring other communities to create local BTC-driven economies.

“Natal and Belo Horizonte already have volunteers who are running full bitcoin nodes with the help of the Brazilian initiative and following the step-by-step manual to replicate the Ceará initiative that will soon be published in the book, “Monte um Banco Padrão Bitcoin” written by Motolese .

You can contribute to the project and follow the development of the roadmap on the official Bitcoin Beach website. In addition to the website, the project has a profile on twitter through which information about it is also disseminated. Also Read: Zilliqa Announces Metaverse for April 2nd; token shoots 100% Read also: Shiba Inu starts its metaverse and SHIB rises 14% in the last 7 days Read also: 35 NFTs, worth R$ 4.3 million, are stolen in phishing attack Next Article How to change Alexa activation name?

How to Invest in Cryptocurrency

With the commotion that has been organized these days with the purchase of Twitter by Elon Musk (founder and CEO of Tesla and SpaceX, among […]