The exchange Binance caused controversy and was ‘cancelled’ this Wednesday (20) by disclosing its new symbol, considered by some to be similar to that of Nazism, especially considering that the date chosen is Hitler’s birthday. In recent years, many companies have purchased emojis from Twitter that accompany the hashtag with a specific term. The amount paid for these emojis is not disclosed by the social network, but it is estimated that placing a personalized hashtag is expensive, being a value paid per word. Bitcoin was the only one to get this spotlight for free, as the founder of Twitter is a fan of the digital currency and granted the benefit to the community. Either way, this is a way to promote terms and gain network attention, or disapproval.

This Wednesday morning (20), Binance faced a major problem with its public image and a dark history of humanity when launching a new symbol. Published with an air of novelty, the Binance Twitter account released three new custom hashtags on the social network. After the publication aired, CEO CZ also shared the release.
Binance features symbols similar to Nazism on Hitler’s birthday. Twitter. Watching the sloppy launch, the cryptocurrency community soon noticed a controversial detail: Binance’s new symbol looks a lot like the swastika of Nazism. And to make matters worse, April 20th is the date on which Hitler was born, in the year 1889. That is, the community immediately echoed the new launch of Binance as a blunder by the marketing team of the largest cryptocurrency exchange by volume in the world. . The Bitcoin Daily profile even thought that the Binance symbol just needed to be accompanied by the Nazi salute, the similarity was so obvious. 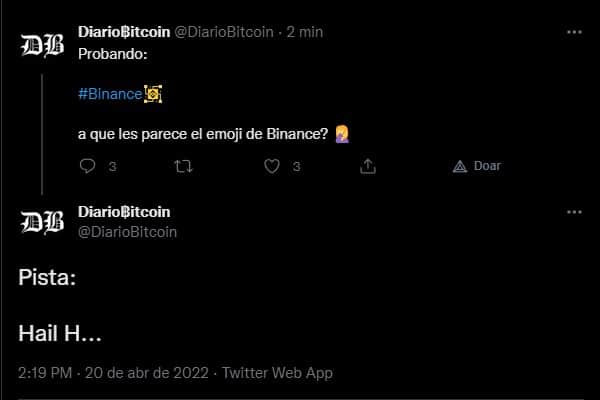 Controversial Binance hashtag similar to Nazi swastika reverberates on social media. Twitter. Another user who saw the unfortunate association said that this was certainly a problem with the advertising team who made a huge gaffe, and should take responsibility for the mistake. 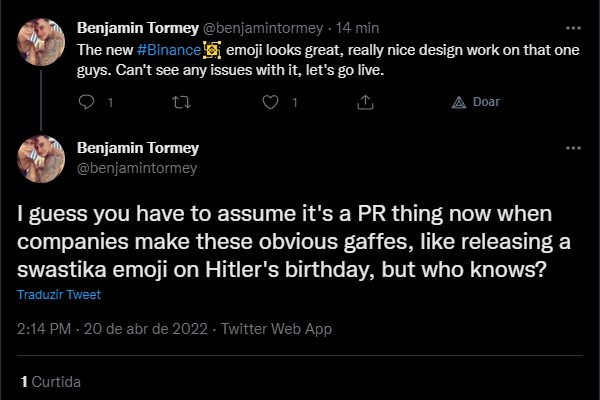 In Brazil, publicizing a symbol of Nazism carries a prison sentence and a fine

After the cancellation by Twitter, the profile of Binance and its CEO CZ deleted the publication of the launch of the new controversial symbols. It is worth remembering that in several countries, publicizing the symbol of Nazism is a crime that can lead to fines and imprisonment. In Brazil, for example, Law No. 7,716/1989, in its article 20 and paragraph 1, informs that this is a crime punishable by a fine and imprisonment.
“Art. 20. Practicing, inducing or inciting discrimination or prejudice based on race, color, ethnicity, religion or national origin. Penalty: imprisonment from one to three years and a fine. § 1 Manufacture, commercialize, distribute or broadcast symbols, emblems, ornaments, badges or propaganda that use the swastika or swastika cross, for the purpose of disseminating Nazism. Penalty: imprisonment from two to five years and a fine.”

What did Binance say?

In a note published on Twitter, exchange Binance said that the case is regrettable and does not know how it passed after validation by many people.

“Well, that was obviously very embarrassing. We’re not sure how this emoji went through multiple layers of review without anyone noticing, but we immediately flagged the issue, removed it, and the new emoji design is rolling out as we speak.”

Well that was obviously really embarrassing. We’re not sure how that emoji got through several layers of review without anyone noticing, but we immediately flagged the issue, pulled it down, and the new emoji design is being rolled out as we speak. — Binance (@binance) April 20, 2022

After the airing, Binance released a new emoji, which should take some time to spread through Twitter, but forgetting the relationship with Nazism. 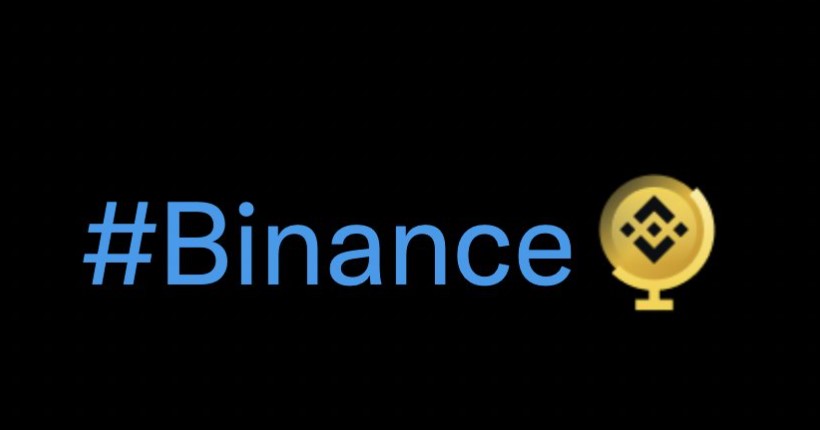 New Binance emoji on Twitter that will replace the controversial association with Nazism. reproduction Previous Article How to Find Files on a Mac

Next Article Moonlit agreed the terms of a loan from the publisher of Model Builder, convened the EGM

How DeFi is helping Africa connect on a global scale

Crypto Advisor spoke with James Saruchera, CEO and co-founder of Kuva Local. Kuva is a global fintech focused on empowering individuals and small businesses to […]

Binance loses one of its main sources of revenue

Binance, the world’s largest cryptocurrency broker in terms of trading volumes, has bid farewell to one of its main sources of revenue. This Friday (13) […]